About two years ago, while I was doing some historical research for my novel Obscenity (coming to a bookstore near you in 2019, give or take!), I happened on an idea I thought would make a good TV series.  I called up my friend Teresa in LA and asked her if she wanted to collaborate.  We wrote the thing, it turned out great, and by the time it was done, I was shocked to discover I had embarked on a career as a TV writer.  Some prominent people read our pilot (I can’t name names), they said encouraging things, we wrote a spec script for Elementary, applied for some fellowships, wrote another pilot, and it became inescapable — this couldn’t go anywhere unless I was willing to move to Los Angeles.  And I wanted it to go somewhere.

Leaving New York is exceedingly hard.  It isn’t only the friends I’m leaving behind.  It isn’t even the fact that I’m leaving my girlfriend behind (at least for the time being), although that is extremely hard.  The fact is I’ve lived in New York for twelve years and I love it here.  There’s no place like it.  Unfortunately, I feel like it’s become a dead end for me.  I’ve enjoyed my life here but I feel like sometime — around 2008, 2009 — I stopped moving forward with my life.  And I know that, sooner than I think, it will be too late to remedy that, and I’ll just have to regret it forever.

And so, Los Angeles!  It’s exciting.  It’s a lovely adventure.  It doesn’t hurt that I’ve liked almost everyone I’ve met there and that it’s a guaranteed sunny winter.  It’s nice to shake up your life every once in awhile, and it’s nice to think that you’re taking a step towards doing something for a living that is important to you, something that you love doing, and somethng that, when you’re not being modest, you have to admit you think you’re incredibly good at.

To be clear, I’m just taking the West Coast for a test drive.  I’ve gotten too old and too cautious to jump into things head first like I used to.  But I hope that in six months I’ll decide it’s going well and I want to make it permanent.  Then there will be a lot of details to work out — a lot of people I’m leaving behind right now that I’ll want to find a way to keep in my life.

And to be honest, one in particular. 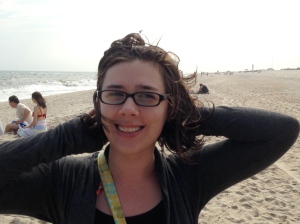 But with all this optimism about the prospect of a move, I still believe that New York is always going to be part of my life.  I plan to be back, and not just for a visit.  There are a lot of good reasons to leave it behind right now, but there’s NO good reason to leave it behind forever.